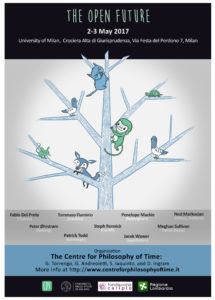 Future tensed sentences display a range of modal interpretations across languages. One outstanding problem in the formal semantic literature is whether these modal interpretations are rooted in a modal semantics of the future tense––this would involve quantification over possible worlds, related via some accessibility relation to the actual world––or are rather generated through pragmatic reasoning. To implement the latter alternative one may assume that the semantics of the future only involves reference to times, while reference to alternative worlds would come about due to uncertainty, or some other factor determining that a plurality of worlds has to be considered when evaluating the utterance in context. I will explore a theory in which the interpretation in context of a future tensed sentence may require universal quantification over a set of open alternatives for the conversational participants in the context, and I will evaluate this theory vis-à-vis one which treats the future tense semantically as a necessity modal, by considering data involving quantifiers and negation.

De Finetti’s conception of events is one of the most distinctive aspects of his theory of probability, yet it appears to be somewhat elusive.Indeed, the crux of his argument is the identification of the agent’s degrees of belief with the price they are willing to pay for an uncertain reward which depends on the future truth value of some presently unknown propositions – the events on which the agents are betting. This clearly suggests that the semantics of events, which bears directly on the definition of probability, is implicitly endowed with an epistemic structure. The purpose of this paper is to give this structure an explicit formal characterisation and to show how the resulting framework helps us making de Finetti’s elusive notion of event much clearer.

Ned Markosian: What an Open Future Is and Why You Should Want One

Peter Øhrstrøm: The Open Future in Historical and Conceptual Perspective

The open future is a common and important idea in modern temporal logic. Ontological, epistemological and logical aspects of this idea appear to have been essential in temporal logic right from A.N. Prior’s first formulations of his tempo-modal logic in the early 1950s. Over the years, Prior obviously regarded this idea as more and more important for a satisfactory understanding of time and existence.  Significant contributions to a deeper understanding of the open future can be found in his published books and papers as well as in his Nachlass. The aim of the present paper is to discuss Prior’s reflections on the ideas of the open future as well as his reasons for emphasising these ideas. Furthermore, the paper focuses on the formal representation of the open future in terms of symbolic logic. A selection of Prior’s examples illustrating his views on the open future will be analysed. Finally, the paper includes a discussion of the further elaborations and developments of Prior’s suggestions in the decades after his death in 1969. In particular, the use of new types branching time models will be considered.

Backwards time travel, at least at first glance, seems to allow for the possibility of bilking attempts – attempts to change the past and thereby engender a contradiction (as in the Grandfather Paradox) – and thus defenders of the possibility of time travel must account for why and how such attempts fail. Analogously, foreknowledge seems to allow for future-direct bilking attempts: that is, attempts to avoid a future that is known and thus in some sense fixed. In the longer version of this paper I argue that the same explanation for why and how past-directed bilking attempts fail can be offered in relation to the future: the future is just as immutable as the past, and the very same banana peels that trip up the would-be grandfather killer can foil the future-bilking foreknower. Under a four-dimensional account of time this is straightforward. Here I consider what it would take for a similar conclusion to be drawn given an open future.

It is rational to take into account the probabilistic volatility when you are planning.  But what if you think you are also likely to change (as a subject) over long intervals of time?  Is this kind of openness/uncertainty a rational basis for discounting your future?  In this paper I will survey two prominent arguments defending personal discounting and argue that both are unsound.

Patrick Todd: How to Russell Open the Future

In my paper, “Future Contingents are all False! On Behalf of a Russellian Open Future,” (Mind, 2016) I proposed a semantics for future contingents on which, given the openness of the future, future contingents systematically turn out false. However, the semantics I propose differ importantly from the “Peircean” semantics (proposed by A.N. Prior) which generate the same result. Unlike the Peircean semantics, my own semantics are inspired by Russell’s theory of definite descriptions. Recently, however, Anders Schoubye & Brian Rabern, and Jacek Wawer, have articulated a number of objections to my account. Here I respond to their objections.

In the branching model, temporal possibilities are represented in shape of a tree-like structure. We argued (in Malpass and Wawer 2012) that it is reasonable to enrich the branching model with an additional factor which distinguishes a single branch–the Thin Red Line–as the unique scenario that is actualized with the passage of time. The Thin Red Line (TRL) theories face a traditional challenge repeatedly stated by Nuel Belnap. Namely, TRL is useless for interpretation of predictions made outside of TRL (non-actual predictions). To answer the problem, we devised a new semantic theory: Supervaluational Thin Red Line. Andrea Iacona (2014) argued that our proposal generates severe semantic failure. He asserts that according to our theory, the meaning of linguistic operators (such as disjunction, future tense, or actuality operator) differs depending on whether they are interpreted in actual or non-actual circumstances. We claim that there is a more charitable interpretation of our theory which preserves the meaning of linguistic expressions across the model. Under this interpretation, our proposal is seen as postsemantic, rather than semantic theory (in the sense of MacFarlane 2014). Iacona’s paper provoked us, nonetheless, to critically reassess our original project and the role of the Thin Red Line in the semantics of branching. We notice that the clumsy, disjunctive feature of our proposal is not accidental, but it’s enforced by the content Belnap’s challenge. After all, he explicitly calls for procedure to interpret sentences used in non-actual circumstances. We think now that the best way to react to Belnap’s worry is to insist that all predictions are actual predictions in which case his challenge doesn’t get off the ground. We sketch two ways to explicate the slogan–elitist and egalitarian–which allow for bivalent treatment of future contingents, free from Belnap’s worry.