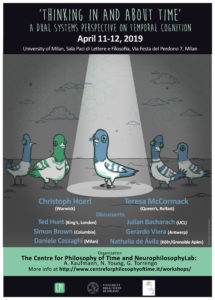 11-12 April – Symposium on ‘Thinking in and about time’
Tagged on: news