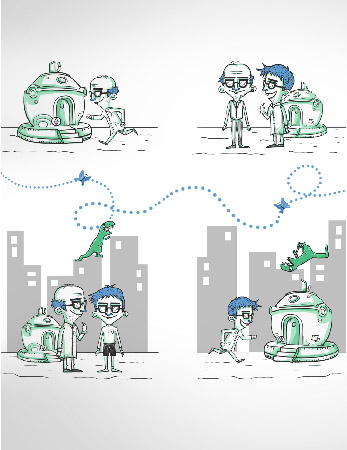 Why do philosophers care about time travel?

In both philosophy and in science fiction we find speculations about scenarios that are alternative to the world we live in. A typical example is time travel, a topic with respect to which philosophers and science fiction writers can learn from each other. Science fiction novels, movies, or tv series sometimes tell stories about people who “leave” their own time and travel to a different one. These can present  philosophically interesting challenges to our ordinary conception of time. Conversely, the conceptual tools developed in contemporary philosophical debates can provide us with a deeper understanding of these stories’ narrative content. Imagine for instance that on a summer evening, Ann — our protagonist — is out for a drink with her friends. She is worried because she has to leave very soon for a boring work dinner, but then remembers that the phone booth just across the street is actually her time machine. Indeed, an older Ann gets out of the booth, waves at her younger self who sits in the pub with friends, and finally heads off on a bike so as to arrive punctually at the boring dinner. Ann can then relax and keep on chatting with her friends in the pub. Later on she will enter the booth, and go back to the precise moment she saw her older self get out and go to the dinner.

Stories like this one are logically coherent. Contemporary philosophy of time provides us with the tools to see that and why this is so. What we need to do is to check whether it is possible to tell the story not only from the point of view of the personal time of the traveller (as I have just done), but also from the point of view of external time, the time shared by all non-time travellers. In the sequence of events that makes up Ann’s personal time, certain events are lived “twice”. For instance, the moment of getting on the bike is first experienced by Ann as something that she is watching her slightly older self to do, and then as something that she is actually doing. However, the fact that Ann experiences the same event twice does not mean that the event itself happens twice. Indeed, the fact that no event happens twice in the story is the reason we can also tell the story from the point of view of the non-time travellers. That is, from the point of view of external time. From her friends’ perspective, older Ann gets on the bike to the work dinner while younger Ann is at their table. Two Ann’s around? Yes, a bit puzzling maybe, but nothing that challenges logic, as long as we think of it carefully enough.

It is easy to see, though, how a time travel story, in the hands of a less cautious storyteller, could quickly go awry and generates much more mind-boggling scenarios. There are at least two ways in which time travel stories may become more challenging, and again contemporary philosophy of time gives us the tools to understand those challenges better. The first way to complicate matters is to tell a story that is incoherent. Imagine Ann really hates the idea of going to that work dinner. After having seen herself getting out of the booth, and when she is ready to go home, she calls a colleague and makes sure that her future self was indeed present at the dinner. Right afterwards, she gets into the booth, goes back in time, but rather than going to the boring dinner, goes home instead. As a sequence of events in Ann’s life, the story may sound coherent — after all I have just told it — but it is easy to see that this story cannot be told from the point of view of external time, and this is why it is incoherent. If — while Ann is still in the pub — one of her friends were to go to the restaurant of the boring dinner and another were to go to her apartment, what would they see? In Ann’s personal time she first learns that she had been at the boring dinner and then decides not to go and returns home instead. But in external time she must either be at the dinner or at her home. She can’t be at both; she can’t be at neither, either. And things can get even worse, after Ann has learnt that she was at the dinner, she may not even bother to go back in time, or she may decide to go back in time and chat with herself and her friends (although the “first time” she wasn’t there). It is easy to see that all such versions of the story cannot be told from the point of view of the external time, and indeed they all are incoherent.

The second way in which a time travel story may be more philosophically intriguing is to introduce “information loops” into a coherent narrative. Imagine that that night Ann didn’t use the time machine, but instead, while she was preparing to go to the restaurant, received a visit from a much older self. The older self is the CEO of the enterprise she is working for now, and indeed the big leap forward in her career began at that dinner. How so? That was the dinner in which for the first time she began talking to her boss about an idea she had for a new product. Where did Ann get this idea? Well, although she never revealed this to anyone, she got it from her older self, who visited her one night and provided her with a detailed blueprint of the new product, and ensured her that it would have been extremely successful in the future. If you think that the story is puzzling, you are right. However, this story is not puzzling because it is incoherent. After all, I have just told it from the point of view of external time without contradiction. However, it is more disturbing than the gratuitous production of extra leisure time that we saw in the first story. What is gratuitously produced here is information Normally information requires endeavour and work by someone to be produced, but in the story just told nobody has produced the information about the blueprint. Young Ann received the blueprint from the older self, who in turn had it only because she received it in her youth by… herself.

Again, philosophy helps us to understand what is at stake here. Although time machines open up the possibility of an information free-lunch, it does not follow that it is likely that these free-lunches would be produced by time machines. Indeed, if we were to think thoroughly about the likelihood of receiving gratuitous information from the future in a time travel scenario — something that we can’t afford to do in this brief note — we would end up believing that we should not bet a cent on it.

Giuliano Torrengo – Why do philosophers care about time travel?